We believe it is critical to invest in our people as they are the lynchpin to our success! 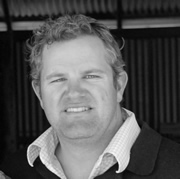 An idyllic childhood on the farm helping with mustering, stockwork and shearing was the lure to commit to the family business in his mid-twenties. Since then Dougal has been the driving force behind an expanding and profitable business. Dougal has invested time and money into understanding wool supply chains, downstream processing and market requirements.

In 1999 a self-funded trip to India (through the WA Wool Strategy Group) enabled him to better understand consumer and processor requirements. International goodwill was reciprocated the following year when Dougal hosted three young Indian Textile Engineers on the farm and accompanied them on a study tour, to expose them to the origins of WA wool. Involvement in an AMS initiated project comprising direct marketing to Italian processors and the development of a branded product (in collaboration with Australian designer Liz Davenport) was pivotal in understanding supply chains.

Dougal has a strong belief in collaborative on-farm R&D and has been involved in numerous industry funded projects. He was the first farmer in Australia to use on-farm fibre measurement with the machine OFDA2000, as a trial conducted by Andrew Peterson, WA Department of Agriculture. More recently Thornton Park was chosen as a focus research farm (Reference WA3) involved in the collation of research data that underpins the highly acclaimed National Lifetime Wool Project. Dougal has had numerous industry roles ranging from Breeding Policy (2003-2006) and Executive Committee (2003-2006) positions in the Australian Merino Society to representation on the WA Farmers Wool Council (2009-2014), the peak WA farmer lobby group.

He was a member of the AWI Young Wool Grower Network (2009 – 2014) instrumental in consulting a new generation of wool producers nationwide and an inaugural member of the ‘invitational only’ Eyre Network (comprising the top 100 sheep producers in WA). In 2012, Dougal was awarded a spot on AWI’s National Leadership Course. 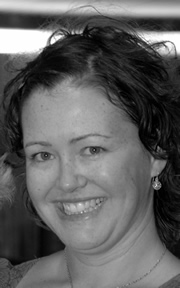 Ashe completed a BSc in Agriculture from The University of WA in 1994, following this she took on a role with the Department of Agriculture as a Development Officer in Landcare. After 3 years the challenge of working independently in a ‘one-person’ office as a Sheep Development Officer arose, this was a unique arrangement being based in JRL Hall & Co (Farm Management Consultant) offices in Darkan, WA. This expedited her knowledge of sheep production systems specialising in value-added supply chains, sheep production and genetics.

Ashe was instrumental in establishing the Prime Merino Lamb Alliance (PMLA) in collaboration with export abattoir WAMMCO International and leading WA Merino Producers. A varied role whereby she coordinated numerous large-scale producer workshops and conferences. Ashe has travelled to India twice, once representing the Department of Agriculture to extend her knowledge of Wool processing and the textile industry.

Ashe joined forces with Dougal in 2003 following a hiatus in 2002 that involved working on an AUSAID project in Vietnam in collaboration The WA Department of Agriculture for 12 months. The project was based at the Food Crops Research Institute in the Red River Delta of Northern Vietnam and entailed collaboratively planning and delivering potato production workshops to local farmers.

Ashe and Dougal have two children, Lachlan and Cleo. Ashe embarked on further studies after successfully being awarded a scholarship from AWI & MLA to complete a Masters Degree in Animal Breeding Management via the University of Sydney. This was completed in 2016.

Ashe is the company secretary for the Australian Grazing Company and manages all accounts, IT and Human Resources.